This section describes the new cloud related concepts and APIs introduced with ESF 6.0.

Before ESF 6.0.0, Cloud APIs were quite tied to Kapua messaging conventions and to the MQTT protocol. Defining custom stacks that support other cloud platforms was possible, but the resulting implementations were affected by the following limitations:

The main interfaces of the new set of APIs and their interactions are depicted in the diagram below: 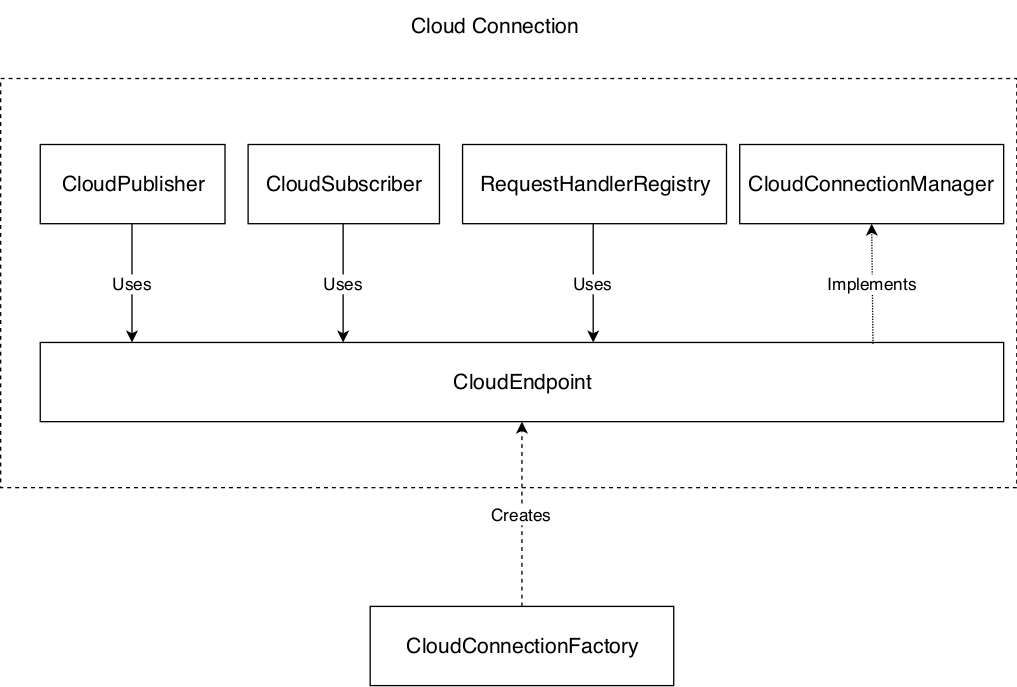 As shown in the above diagram new APIs introduce the concept of Cloud Connection, a set of related services that allow to manage the communication to/from a remote cloud platform.

The services that compose a Cloud Connection can implement the following cloud-specific interfaces:

A Cloud Connection can also include services that do not provide any of the interfaces above but compose the internal implementation.

The CloudEndpoint provides some low level methods that can be used to interact with the remote cloud platform.

For example the interface provides the publish() and subscribe() methods that allow to publish or receive messages from the cloud platform in form of KuraMessages.
Those methods are designed for internal use and are not intended to be used by end-user applications.

The recommended way for applications to publish and receive messages involves using the Publisher and Subscriber APIs described below.
If an application directly uses the methods above, it will lose portability and will be tied to the specific Cloud Connection implementation.

If the messaging protocol implemented by a Cloud Connection supports long-lived connection, then its CloudEndpoint can also implement and provide the CloudConnectionManager interface.

This interface exposes some methods that can be used to manage the connection like connect(), disconnect() and isConnected(); it also supports monitoring connection state using the CloudConnectionListener interface.

The CloudPublisher interface should be used by applications for publishing messages using the single publish() method. This method accepts a KuraMessage which is basically a KuraPayload that can be enriched with metadata.

The main difference with the CloudClient APIs is that the publish() method does not require the application to specify any information related to message destinations.
This allows to write portable applications that are unaware of the low level details of the destination cloud platform, such as the message format and the transport protocol.

An application designed to receive messages from the cloud must now attach a listener (CloudSubscriberListener) to a CloudSubscriber instance.

In this case, the message source cannot be specified by the application but is defined by the subscriber instance, in the same way as the CloudPublisher defines destination for published messages.

The low level details necessary for message delivery and reception (e.g. the MQTT topic and the conversion between KuraMessage and the message format used on the wire) are managed by the publisher/subscriber, typically these details are stored in the service configuration.

While in the previous model an application was responsible to actively obtain a CloudClient instance from a CloudService, now the relation between the application and a CloudPublisher or CloudSubscriber instance is represented as an OSGi service reference. Applications should allow the user to modify this reference in configuration, making it easy to switch between different cloud publisher/subscriber instances and different cloud platforms.

Publisher/subscriber instances are now typically instantiated and configured by the end user using the Web UI.

Publisher/subscriber instances are related to a CloudEnpoint instance using an OSGi service reference encoded in well known configuration property specified in the APIs (CloudConnectionConstants.CLOUD_ENDPOINT_SERVICE_PID_PROP_NAME). This allows the user to create those instances in a dedicated section of the Web UI.

Another field in which the cloud related APIs can be generalized is related to command and control. In the previous model this aspect was covered by the Cloudlet APIs that are now replaced by RequestHandler APIs

Legacy Cloudlet implementations are defined by extending a base class, Cloudlet, which takes care of handling the invocation of the doGet(), doPut(), doPost() ... methods, and of correlating request and response messages. Messages were sent and received through a CloudClient.

More explicitly, Cloudlet only works with control topics whose structure is

and also expects the identifier of the sender and the correlation identifier in the KuraPayload.

In the previous model, there is no way for a cloud stack implementor to customize the aspects above, which are hardcoded in the Cloudlet base class.

The new model delegates these aspects to some component of the cloud stack, and requires applications that want to support command and control to register themselves as RequestHandler to a RequestHandlerRegistry instance.

In order to ease porting old applications to the new model, some of the concepts of the old Cloudlet APIs are still present, this can be seen by looking at the RequestHandler interface definition:

The parameters above are the same involved in current Cloudlet calls. The request id and requester client id parameters are no longer part of the API, because are related to the to the way Kapua correlates requests and response. In the new API, request and response identifiers are not specified and not forwarded to the Cloudlet, this allows the CloudletService implementation to adopt the platform specific conventions for message correlation.

The fact that set of Cloudlet parameters are roughly the same involved in current Cloudlet calls allows existing Cloudlet based applications to continue to work without changes to the protocol.

The CloudConnectionFactory will be typically invoked by the Web UI, and is defined as follows:

The getManagedCloudConnectionPids() returns the set of kura.service.pid managed by the factory.

The getStackComponentsPids(String pid) returns the list of the kura.service.pids of the ConfigurableComponents that are associated with the CloudEndpoint with the specified pid. The Web UI will render the configuration of those components in separated tabs, in the dedicated CloudConnections section.

In order to ease the transition to the new model, legacy APIs like CloudService and CloudClient are still supported in ESF 6.0.0, even if deprecated.

The default Kapua oriented CloudService implementation is still available and can be used by legacy applications without changes.
The default CloudService instance in ESF 6.0.0 also implements the new CloudEndpoint and CloudConnectionManager interfaces.

Updated over 2 years ago