The component allows interacting with an InferenceEngineService to perform machine learning-related operations.

An InferenceEngineService is a Kura service that implements a simple API to interface with an Inference Engine. The Inference Engine allows to perform inference on trained Artificial Intelligence models commonly described by a file and some configuration for explaining its input and outputs. An example of Inference Engine implementation is the Nvidia™ Triton Server inference engine.

Once these models are loaded in the engine, the AI wire component allows to specify the name of the models that are used in the pre-processing, infer, and post-processing steps. Only the infer model name is mandatory so that it is possible to just use the strictly necessary steps in case the pre/post-processing is performed directly by the infer step. 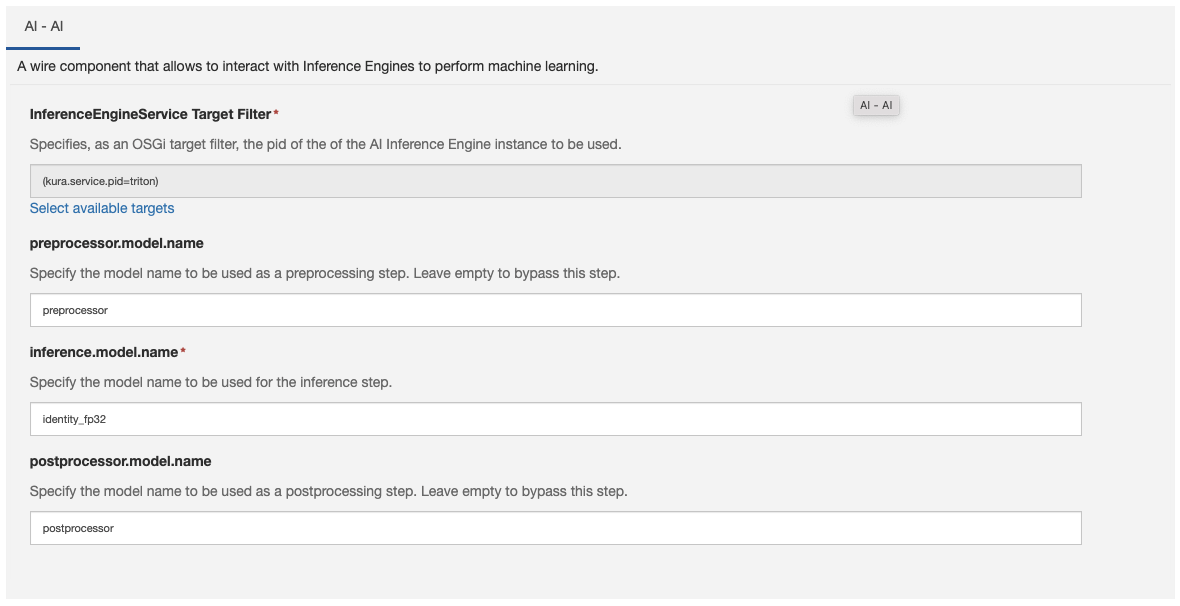 The AI wire component takes a WireEnvelope as an input, it processes its records and feeds them to the specified preprocessing or inference model. The outputs of the inference or the post-processing step are then reconverted into a wire record. This section explains the inputs and output formats that the wire component is expecting. Not specifying the models according to this contract will result in a non-functioning inference.

The 3 inference steps are applied on each WireRecord contained in the input WireEnvelope.

The inputs and outputs will have assigned the corresponding Kura DataType, which can be one of:

Reference to Introduction for the data types that are allowed to flow through the wires.

The models that manage the input and the output must expect a list of inputs such that:

In the following, two example configurations for Triton Inference Engine models are provided. A complete usage example that implements an Anomaly Detector using a RaspberryPi SenseHat is provided in the Kura examples repository.

Following, an example of a model configuration for the Nvidia™ Triton Inference Engine. It expects the input from the WireEnvelope that contains a record with properties:

This record can be generated from an asset with channel names as above. The output will be a single tensor of type Float, of shape 1x13, and name OUT_PRE.

Note that each input will have shape 1.

Following, an example of a Nvidia™ Triton Inference Engine configuration that takes input IN_POST and produces outputs that will be mapped to a WireRecord with the properties as follows:

Note that each output will have shape 1.