An Asset can be used inside a Wire Graph, in this case it is represented as node with two ports an input port and an output port. An Asset used in this way is called WireAsset.

Every time a WireAsset receives an envelope on its input port, it will read the values of all of its channels with READ or READ_WRITE type.
The result is emitted as a WireEnvelope with a single WireRecord
The WireRecord contains the following properties:

For each channel in asset configuration with READ or READ_WRITE type named name:

For example, if the Asset attached to the Modbus Driver shown in the picture below receives a WireEnvelope on its input port, it can emit an envelope with the following content, assuming that the read operation for each channel succeed: 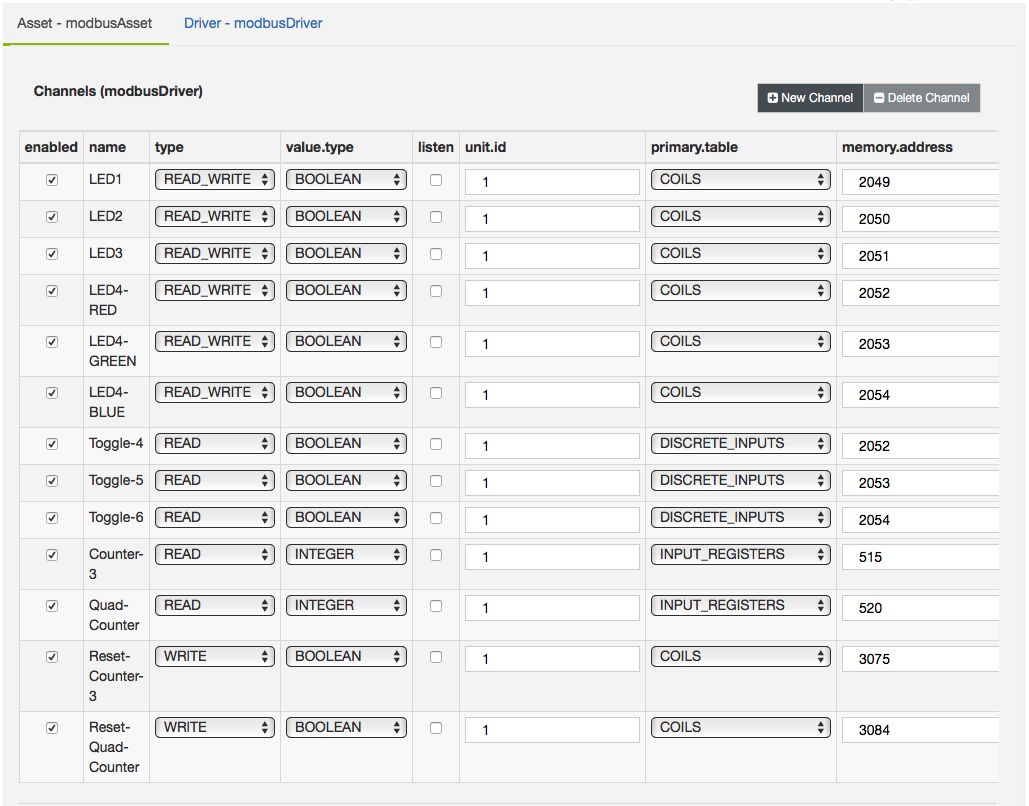 The emitted WireEnvelope contains a single record containing the properties described above.

An example of such component can be the Timer, this component can be configured to periodically emit an envelope containing a single wire record with a single property named TIMER reporting the current UNIX timestamp.
Connecting this component to a WireAsset allows to implement a simple read polling cycle. The configuration of the timer defines the polling interval.

Enabling the listen flag allows to enable unsolicited notifications from the driver.

When this happens, the Asset will emit an WireEnvelope containing the updated value for the channel involved in the event. The content of this envelope is the same as the one generated in case of a read operation on the channel.

For example if listen is ticked for LED1 and the driver above detects a value change in that channel, the Asset will emit the following envelope:

This mode does not require to connect any component to the input port of the driver. The conditions that trigger the events for the channels and their meaning is reported in the Driver specific documentation.

Note: The example above is not completely realistic since the Modbus driver does not support listen mode. In this case ticking the listen flag will have no effect. The support for listen mode is mentioned in driver documentation.

Listen mode and Read mode are not mutually exclusive. If a channel is defined as READ or READ_WRITE and the listen flag is ticked, the driver will emit the channel value when a WireEnvelope is received on its input port or when a driver event is generated.

Additionally, the Wire Graph can also be used to update asset values through write operations, according to the following rule.

Every time a WireAsset receives an envelope on its input port, for each property contained in the received WireRecords with key <key>, value type <value type> and value <value>, the driver will perform this operation:
If a channel with name <key> is defined in asset configuration whose value.type is equal to <value type> and type is WRITE or READ_WRITE, then the Asset will write <value> to the channel.

For example if the Asset above receives the following envelope:

The following operations will happen:

Updated over 2 years ago