This section provides a simple example of how to create a “Hello World” OSGi project using Eclipse. With this example, you will learn how to perform the following functions:

Setting up the ESF Development Environment 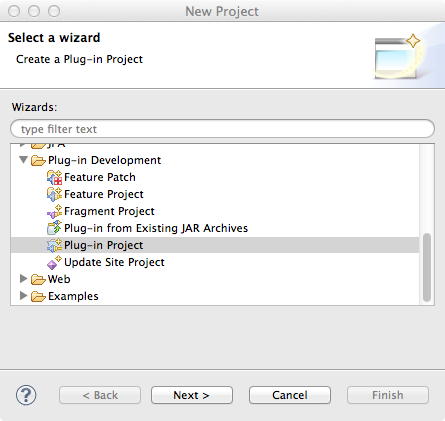 Your screen should display the New Plug-in Project dialog box as shown in the following screen capture. Enter your project a name, such as “com.eurotech.example.hello_osgi”, in the appropriate field. Under Target Platform, ensure that the an OSGi framework option button is selected and set the variable to standard as shown below. You can also (optionally) add projects to a working set. To continue, click Next. 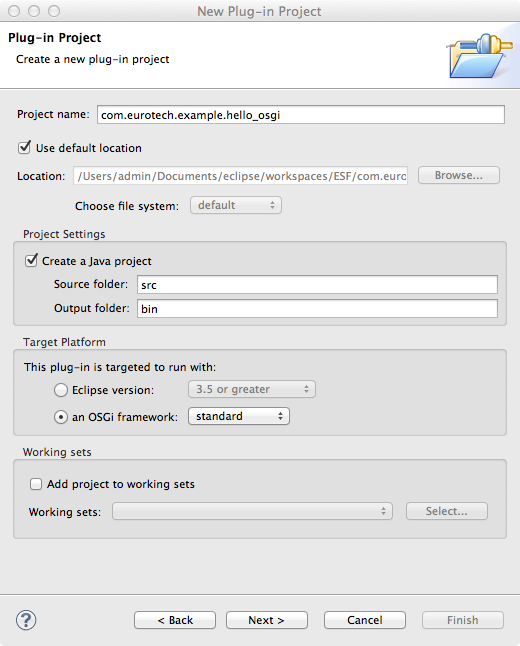 In the next New Plug-in Project menu (shown below), change the Name field to a descriptive name, such as “Hello World Example with ESF Logger”. 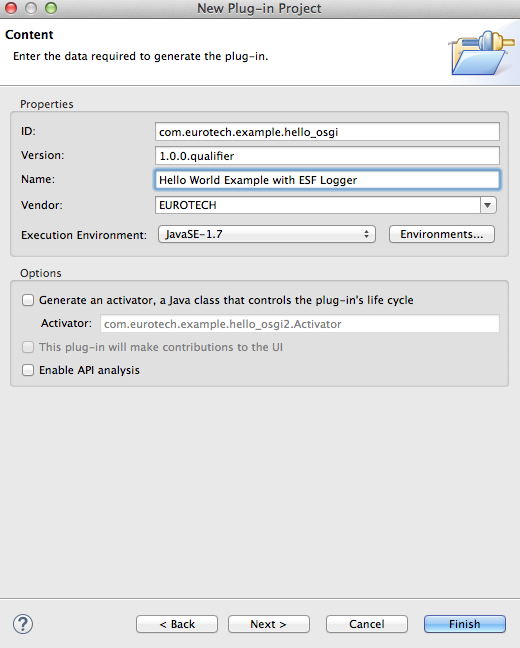 Finally, uncheck the Generate an activator, a Java class that controls the plug-in’s life cycle option button. For the purposes of this example, a single class will be used. An Activator class will not be created; instead, OSGi Declarative Services will be used to start and stop the bundle. Click Finish.

If the Open Associated Perspective pop-up window (shown below) appears for adding Plug-ins and Error Log views, select Yes or No depending on your development requirements.

You should see the new project in the My Projects working set in the Package Explorer (or Project Explorer). Also, you will see the MANIFEST.MF was automatically opened in the Manifest Editor. An OSGi bundle is a regular Java .jar file that contains Java code and resources and a custom Manifest and an Activator.

First, you will use the Manifest Editor in Eclipse to add some dependencies. Click the Dependencies tab at the bottom of the editor screen and then click the Automated Management of Dependencies heading to expand it. 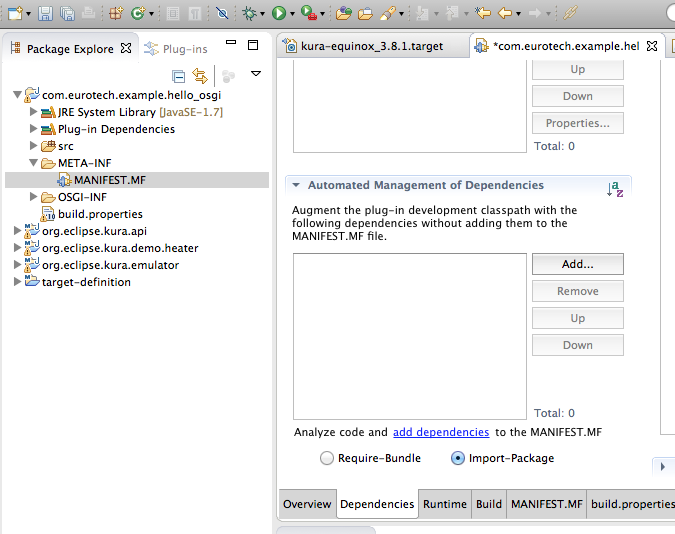 Under Automated Management of Dependencies, click Add. In the Select a Plug-in field, enter org.eclipse.osgi.services. Select the plug-in name and click OK. 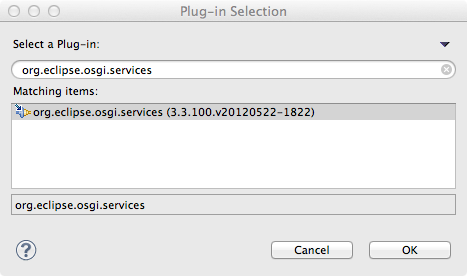 This operation is very much like adding standalone jars to the buildpath by including the ‘-cp’ argument to javac. However, in this case you are telling Eclipse where to find these dependencies the “OSGi way”, so it is aware of them at compile time. Click Add again and use the same procedure to add the following dependency:

You should now see the list of dependencies. Save changes to the Manifest. 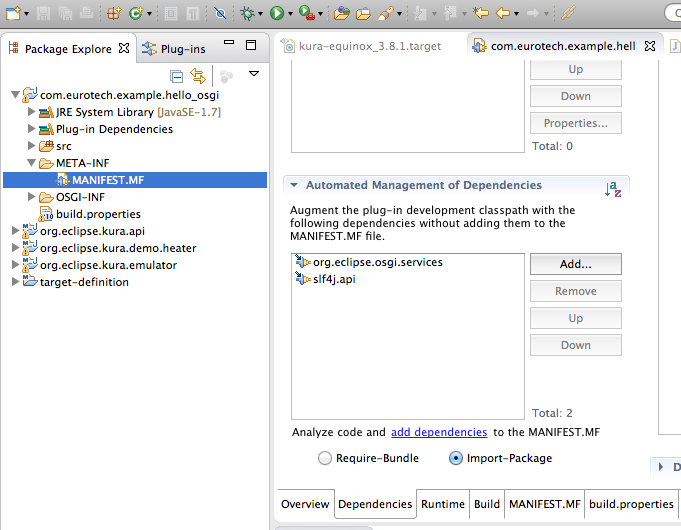 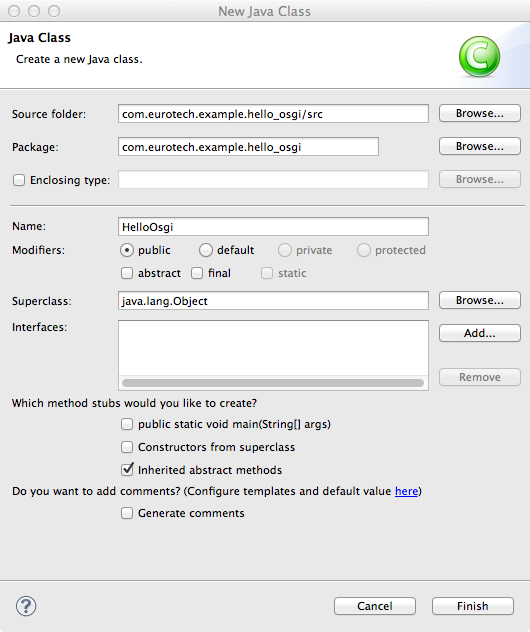 Write the following code for the new class. You can copy and paste the code provided below into your newly created Java class file.

One convenient feature of Eclipse, auto-completion, is worth mentioning here. If you type ‘s_logger.’ (instance name of the “LoggerFactory.getLogger” method) and stop after the period, it will show you a list of methods implemented in that class. The examples above show two different methods used for logging messages. Logger methods include: “error”, “warn”, “info”, “debug”, and “trace”, which represent increasingly lower (more detailed) levels of log information. Logger levels should generally be used to represent the following conditions:

At this point, there will be errors in your code because of unresolved imports.

Select the menu Source | Organize Imports to resolve these errors. Because you added the “org.slf4j” to your dependency list, you will be prompted to choose one of two potential sources for importing the “Logger” class. Select org.slf4j.Logger and click Finish.

Now the errors in the class should have been resolved. Save the HelloOsgi class. 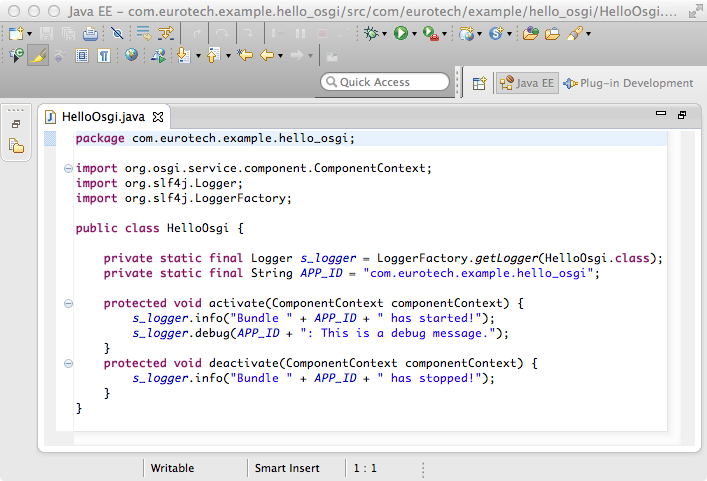 The complete set of code (with import statements) is shown below.

For more information on using the Simple Logging Facade for Java (slf4j), see the Logger API. 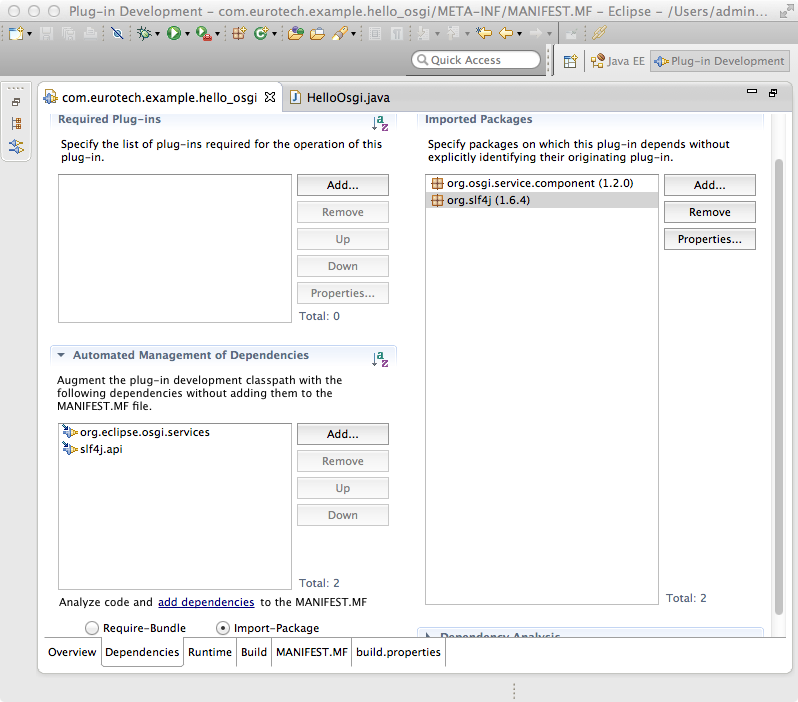 Right-click the example project and select New | Other. From the wizard, select Plug-in Development | Component Definition and click Next. 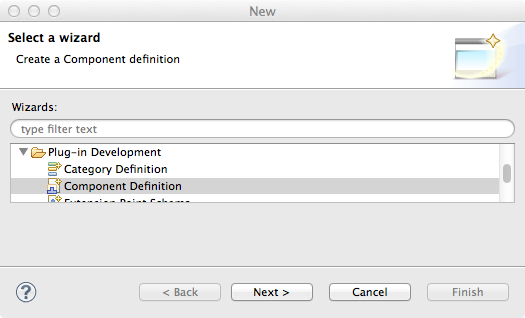 In the Class field of the New Component Definition window shown below, click Browse. 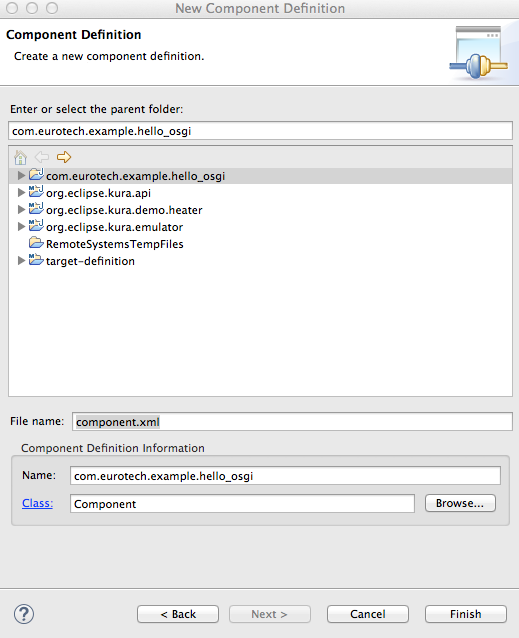 Enter the name of your newly created class in the Select entries field. In this case, type the word “hello”, and you will see a list of matching items. Select the HelloOsgi class and click OK. 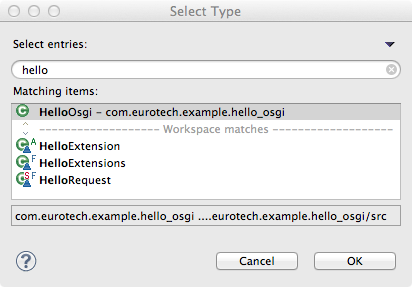 In the Enter or select the parent folder field of the New Component Definition window, add "/OSGI-INF" to the existing entry (e.g., com.eurotech.example.hello_osgi/OSGI-INF). Then click Finish. 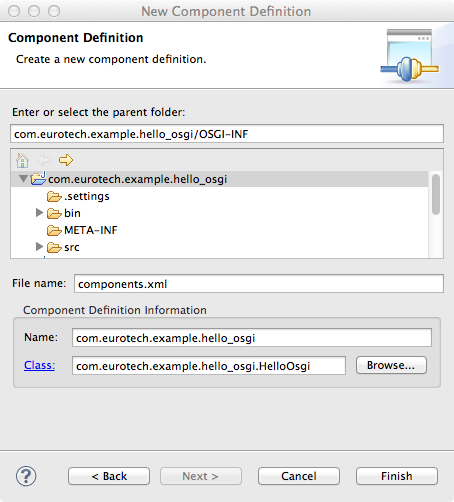 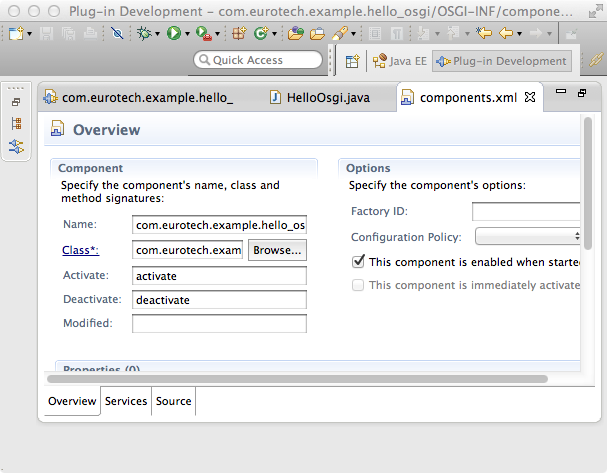 The next few sections describe how to create a stand-alone JAR file as a deployable OSGI plug-in and how to create an installable Deployment Package.

An OSGi bundle is a Java archive file containing Java code, resources, and a Manifest.

A Deployment Package is a set of resources grouped into a single package file that may be deployed in the OSGi framework through the Deployment Admin service and may contain one or more bundles, configuration objects, etc.

Your bundle can be built as a stand-alone OSGi plug-in.

To do so, right-click the project and select the Export menu. This is equivalent to running javac on your project. From the wizard, select Plug-in Development | Deployable plug-ins and fragments and click Next. 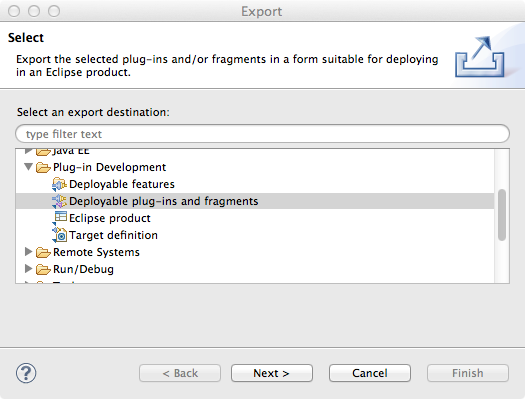 Under Available Plug-ins and Fragments of the Export window, ensure the newly created plug-in is selected. Under Destination, select the Directory option button and use the Browse button to select an appropriate place to save the JAR file on the local file system.

During the deployment process that is described in the following section, you will need to remember the location where this JAR file is saved. 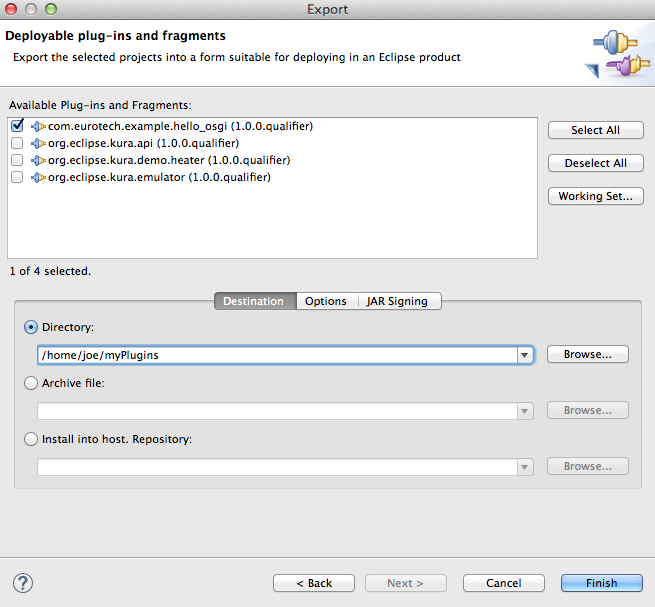 This will create a JAR file in the selected directory (e.g., /home/joe/myPlugins/plugins/com.eurotech.example.hello_osgi_1.0.0.jar).

Rather than creating a stand-alone plug-in, you can also create a Deployment Package that contains multiple bundles, configuration elements, etc. that can be deployed into an OSGi framework. In this example, you will simply create a Deployment Package containing the “hello_osgi” bundle. This step requires mToolkit to be installed. (See Development Environment Setup for instructions on setting up the Eclipse development environment.) 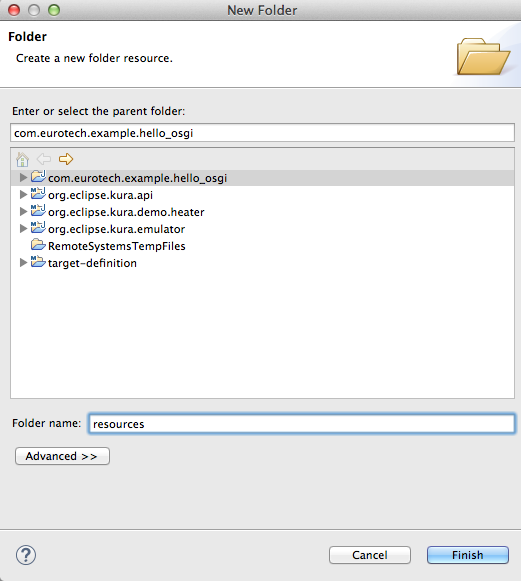 Then repeat this step to create a folder named “dp” under the resources folder. The resources/dp folder will be used to store the Deployment Package. 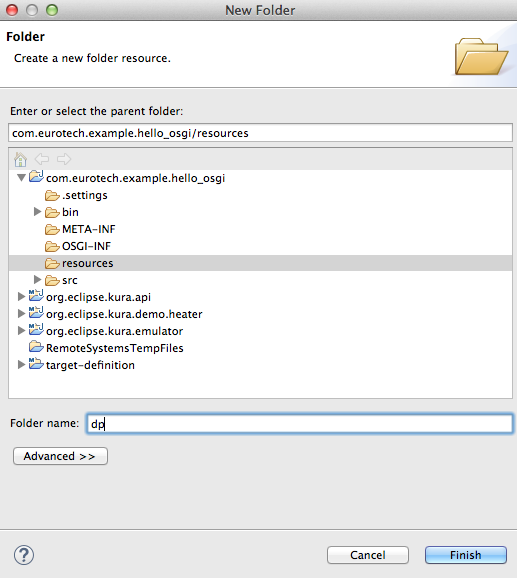 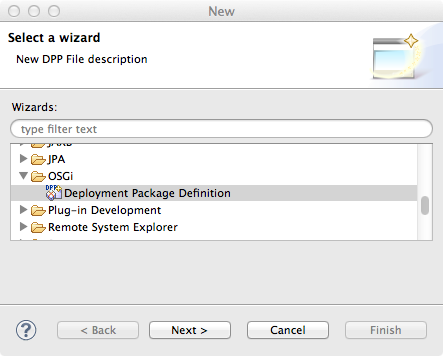 Ensure that the Target folder field of the New dpp file window is set to the /[project_name]/resources/dp folder. In the File name field, enter the name for the new Deployment Package file to create, such as “hello_osgi”. A version number can also be entered in the Version field. Then click Finish.

Under the resources/dp folder in your project, verify that the [filename].dpp file was created. This is a Deployment Package Project that provides information needed to create the Deployment Package, such as its output directory, ant build file, etc.

Select the Bundles tab and then click New. In the Bundle Path column, select the browse icon. Browse to either the bundle’s project file ([filesystem_path]/.project file in the Workspace) or to the bundle’s JAR file created earlier. Select the file and click Open. Doing so should populate the remaining columns as needed. 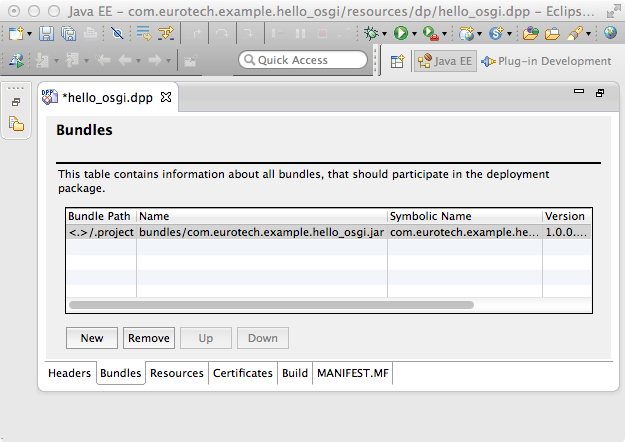 Save changes to the deployment package file.

In the resources/dp folder, right-click the .dpp file. Select Quick Build. A new [filename].dp file will be created in the same directory. This is the final Deployment Package that can be installed on a remote target system.

In conclusion, you were able to create a new bundle from scratch, write the Java code and Activator, modify the Manifest, and build the plug-in and/or Deployment Package that can be used in a ESF environment. The next steps will be to test your code in an Emulation mode and/or to deploy your code to a target system running ESF.

Updated about 3 years ago