This driver interfaces to the LoRa® packet forwarder by Semtech running on localhost and performs some of the functions that in a LoRaWAN® are operated by the Network Server and the Application Server.

End-nodes are represented by channels that allow configuring the LoRa® physical layer and the security material used by the LoRaWAN® network and application layer.

The LoRa® driver allows to transmit and receive raw payloads. Encoding and decoding the payload is handed off to client code, the Wires framework or to the back-end of cloud computing platform.

The LoRa® driver features include:

In the same way as the other Drivers supported by ESF, it is distributed as a deployment package on Eclipse Marketplace. It can be installed following the instructions provided here.

A new LoRa® driver instance can be created either by clicking the New Driver button in the dedicated Drivers and Assets Web UI section or by clicking on the + button under Services. In both cases, the com.eurotech.framework.driver.lora factory must be selected and a unique name must be provided for the new instance.

For an OTAA device the application key (app.key) is mandatory, appS.key and nwkS.key will be automatically generated during the acticvation process.

Adaptive data-rate lets LoRa® Server control the data-rate and tx-power of the device, so that it uses less airtime and less power to transmit the same amount of data. This is not only beneficial for the energy consumption of the device, but also optimizes the spectrum.

The parameter that controls the data rate is the “’Spreading Factor” (for detailed explanation see https://www.semtech.com/uploads/documents/an1200.22.pdf)

(Important note : This ADR management is currently only valid for European Standard.)

We are considering 6 levels for the Data Rate :

Currently, the LoRa® driver implements a simplified management of ADR. The configuration of the ADR is included in the channel definition :

If ADR is enabled for a sensor, the SF value and Tx Power will be programmed by a command sent from the gateway to the sensor only if the current Spreading Factor is higher than the one configured for the channel AND the SNR is greater than 0.

By default a LoRa® sensor starts with a SF = SF12/125KHz and a Tx Power = 14 dBm. On the first packet received, the gateway will determine if the Spread factor and Tx power can be modified and will send a command to apply it.
After this step, the sensor will automatically increase SF if the signal is bad until it reaches a correct value.

Using the Wires functionality of ESF will take care of publishing the data corresponding to the channels defined previously in the Cloud Platform of your choice.

The String exported by each channel is a json string including the metadata of the packet and the payload decrypted represented by an hex string:

It is generally a good idea to use a javascript filter to publish only useful data after decoding the payload. You need first to install the filter component from Eclipse MarketPlace.

We use a JSON parser to extract each field and publish only the values that interest us. In the example below, we publish the rssi and the temperature decoded from the payload:

In Class A mode (the only mode currently supported by the driver), downlink messages can only be sent during the receive window opened after an uplink message (from sensor to application) has been sent by the sensor.

The LoRa® driver will store the message to send to the sensor and will send it at the next uplink reception.

How to transmit a downlink message to the LoRa® driver:

In the most common case, the message will be sent by the external application that manages the LoRa® sensors, using the Cloud connection.

We will add to the Wires graph a Cloud subscriber that will receive these messages and pass it through a Javascript Filter to the asset containing the LoRa® channels:

Sublora = Subscriber configured to receive messages on a given topic: 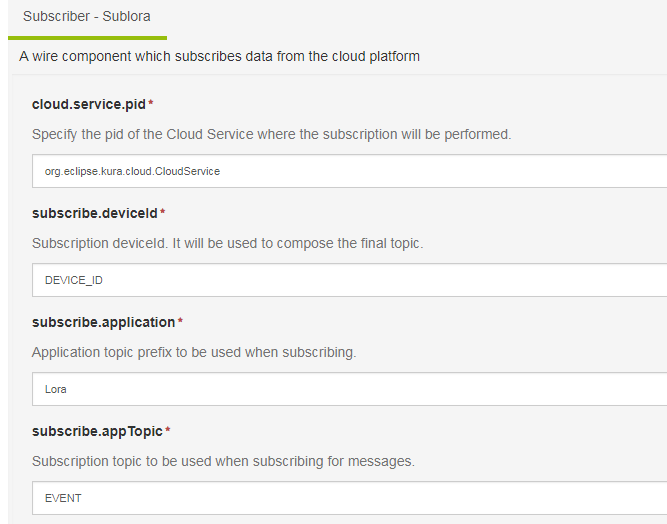 In this case the messages are sent on topic: [accountname]/DEVICE_ID/Lora/EVENT and must contain a metric in the following format: [name of the channel]:[payload to send to the sensor]

The message received is then transferred to a JavaScript Filter that will extract the payload to be transmitted to the LoRa® sensor: 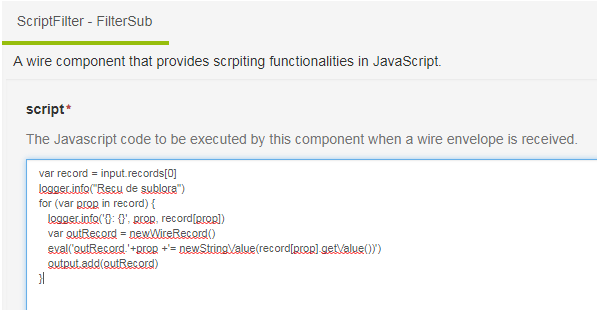 This script uses the eval function to build a metric containing the name of the channel (prop) and the payload (record[prop].getValue()).

This payload must be a string representing an array of bytes coded in hexadecimal. For example, here: “4555524F54454348” represents the string “EUROTECH”.

The channel concerned in the asset (Mote) receives the message and stores it until it receives an uplink message from the concerned channel.

The configuration of the channel must be as follows:

Important note:
The subscriber will receive messages in the format configured for the payload.encoding in the Cloud Service.
It can be Kura Protobuf or Simple json.

Be careful to send messages in the right format.

Updated about 3 years ago